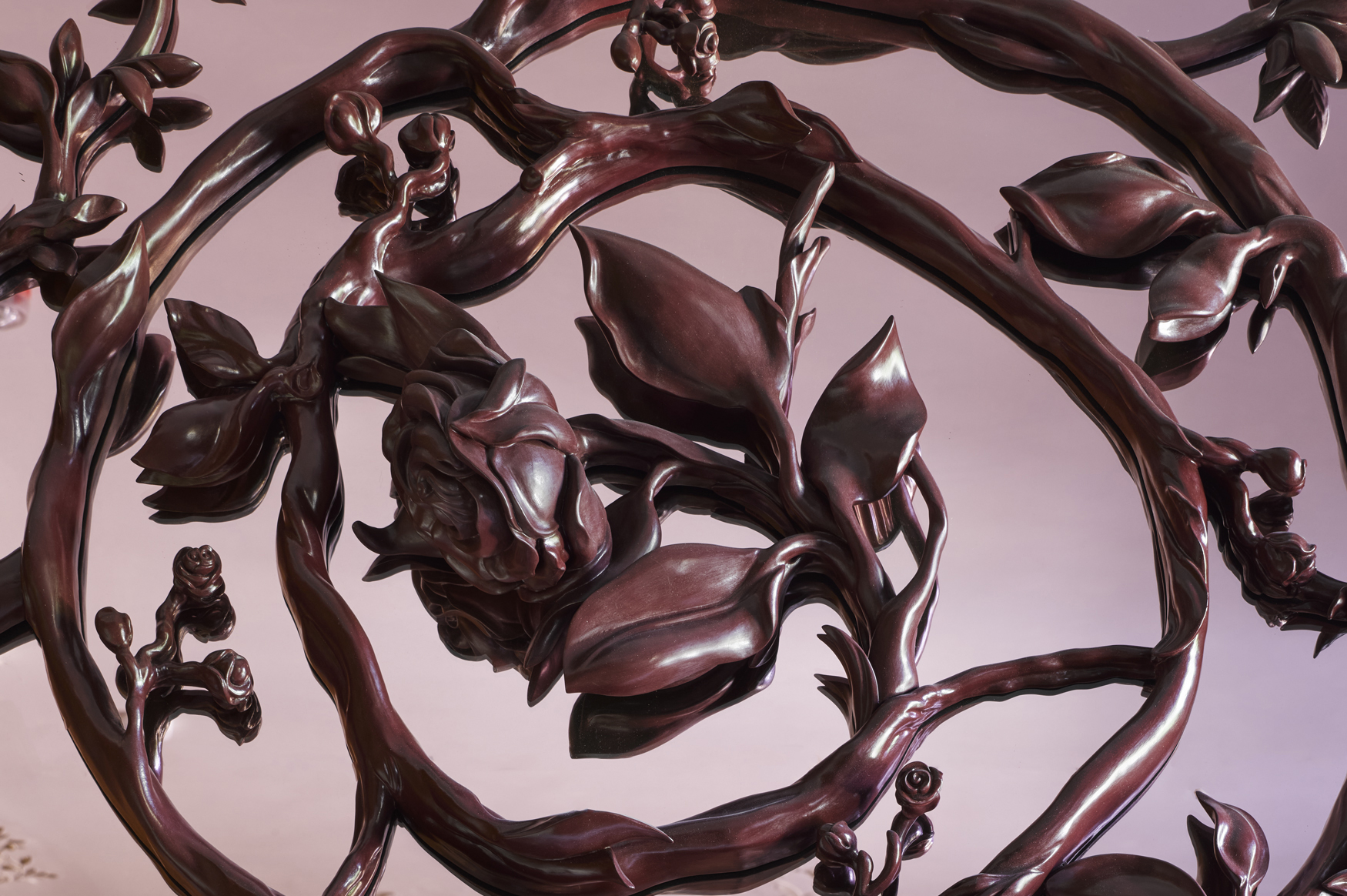 AS ABOVE SO BELOW

A unique commission for the Fondazione Luigi Rovati, Milan. 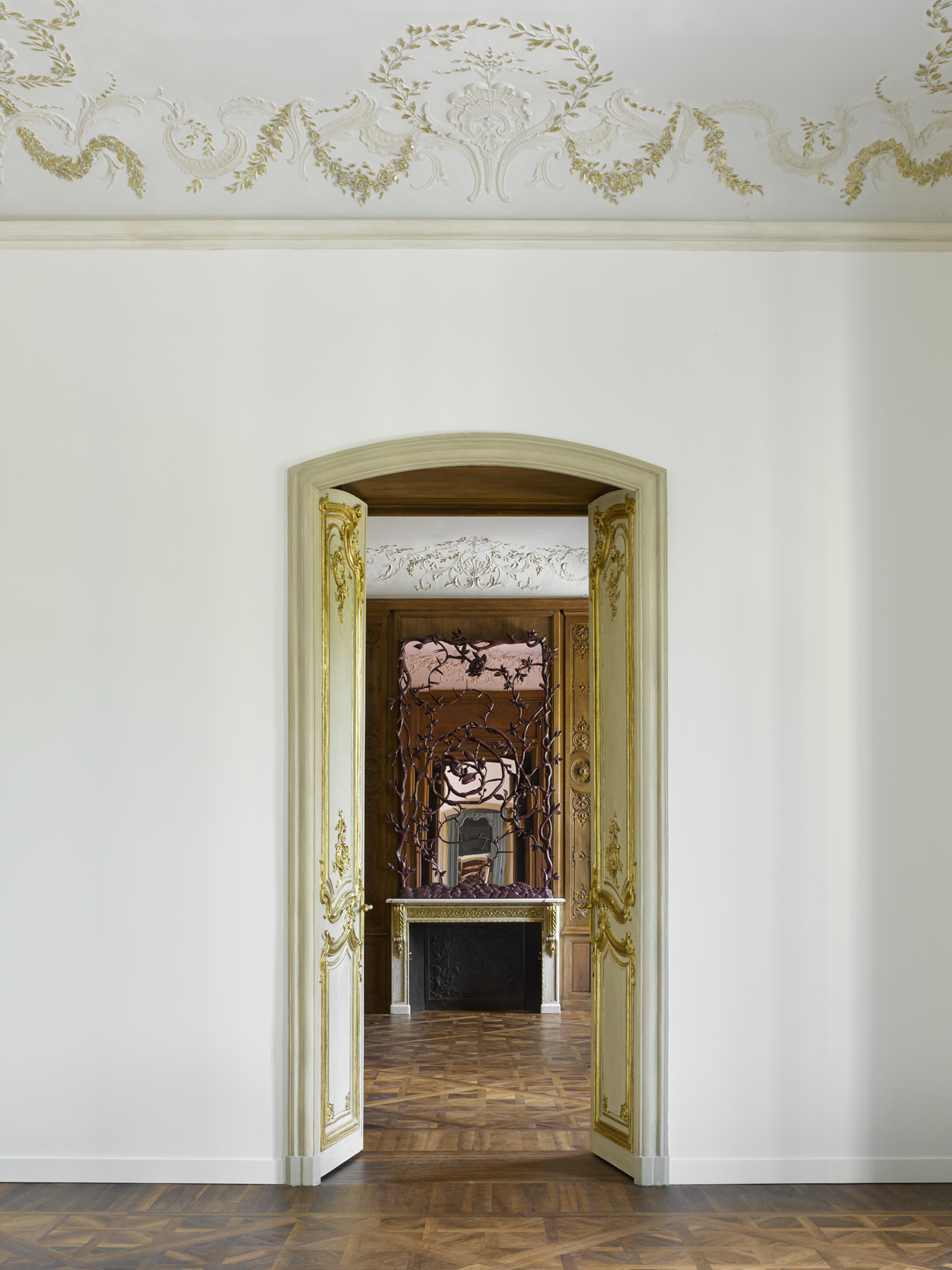 AS ABOVE SO BELOW

Its name taken from an alchemical book of the 16th century, the mirror depicts the material world (below) as rocks and grottos reaching up into the spiritual world (above). The leaves and reflected light indicate spiritual transformation.

The carved wooden frame is painted with gesso, a solution of white chalk and animal glue, to provide a ground for the final layer of coloured pigment.

This final finish is composed of several layers of a purple-brown known as ‘caput mortuum’, a mixture of natural iron oxides, the name derived from its use by alchemists, its symbol being a stylized death head representing death and decay.

The frame is then burnished with an agate burnisher to create a smooth and highly reflective surface enhancing the carving.  The burnished caput mortuum pigment is given vitality by the pink infused glass, composed of thirty-eight individual pieces.

The mirror echoes the cycles of nature, the carved branches and leaves emerging from rocks and grottos into light, reflection…and infinity.

A MARRIAGE BETWEEN ARTIST AND CRAFTSMAN

“As Above So Below” is the culmination, the fifth of a series of large mirrors created by Marianna Kennedy over the last ten years – the major challenge posed in its creation for the Fondazione Luigi Rovati being its extraordinary size, almost double that of each of the previous four. The conception and realization of this work represents a milestone in the artist’s career, and the conclusion of the series.

Based on the original drawing, a life-size canvas was painted and installed in the Museum when all the decorations of the Piano Nobile had been removed for restoration in 2018, so as to verify its size and design in situ…and from that moment, the extraordinary and lengthy process of making began.

The carver Hugh Wedderburn and the gilder Issy Tennant act as an extension of the artist’s mind and hands; they have learned how to infuse the work with life – the product of a mutual understanding which has taken years of practice to perfect. The carving process is constantly overseen by the artist, as well as the final burnishing of the patina in order to control the sculptural effect and the reflection of light in every part of the work.

The construction of the mirror has been masterfully accomplished by the joiner Simon Kidd, fulfilling Marianna’s wish that the structural techniques be based on XVIII Century English precedent.

The mirror plate glass, with its custom rose coloration, is an evolution of a traditional mercury glass, created by a restorer who has worked on the most important European mirrored rooms of the XVIII Century. Thirty-eight individually shaped pieces of glass were created to give the illusion of one large mirror plate; they were inserted into the backing structure in paired inlaid shapes before the carved sections were joined together.

The work has been installed under the supervision of Fabiano Panzironi, after being carefully assembled by all the artist’s collaborators in the Arms Room, conscientiously respecting the fragility of the original marble fireplace and the period boiserie.